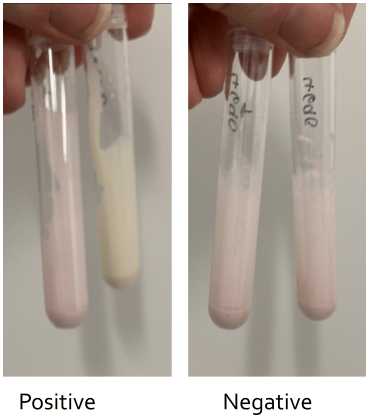 Enterobacterales that produce extended-spectrum β-lactamases (ESBLs) are an important group of Gram-negative bacteria that cause a wide range of infections and may be resistant to multiple classes of antimicrobial agents.

ESBLs fall largely into three groups, TEM, SHV or CTX-M enzymes. In the UK, TEM and SHV were the prevalent enzymes pre-2000; however, in the early 2000s, CTX-M ESBL types emerged and became prevalent. Timely identification of these bacteria can inform appropriate antibiotic prescribing and infection prevention measures.

The Rapid ESBL Screen kit 98022 (Rosco Diagnostica, Switzerland) detects all types of ESBL and requires two tubes per isolate, one containing cefotaxime plus indicator and the other cefotaxime with tazobactam plus indicator. The test takes 30-40 minutes to set up, may take up to 2 hours to read the results. A control tube is required for each isolate. A positive result is indicated by a colour change from red to yellow (see Figure 1A).

The CTX-M M NG Biotech test detects all five of the CTX-M groups (Groups 1, 2, 8, 9, 25), has both a control and test line within the cassette, takes 10 minutes to set up and a maximum of 15 minutes to run. Positive results are indicated by a coloured test line, plus a coloured control line; whereas a negative result is indicated by a coloured control line only. If there are no lines present, or only a single test line, the test is invalid.

At Whiston Hospital, detection and confirmation of ESBL-producing Enterobacterales may take up to three days. The current method to confirm ESBLs is considered expensive and results take up to two hours.

Eighty previously identified ESBL-producing Enterobacterales isolates were cultured from frozen storage. Isolates were identified and tested for antimicrobial susceptibility using the VITEK2® analyser. ESBL disc synergy tests were completed for each of the isolates:

Twenty-three isolates were selected for further testing with the CTX-M M NG Biotech test and the Rosco ESBL Screen kit 98022:

It is likely that the six isolates negative by CTX-M M kit and positive by Rosco ESBL screen belong to other ESBL types (TEM or SHV) rather than those belonging to the CTX-M family.

From this piece of work, a new protocol for the confirmation of ESBLs at Whiston Hospital is proposed. The VITEK2® and disc synergy tests will remain as ESBL screening methods; however, when either of these methods flag a potential ESBL, the CTX-M M NG Biotech cartridge test will be used in the first instance, providing results within 15 minutes. If a negative result arises from the CTX-M M cassette, the Rosco ESBL Screen will then be used to confirm the presence of an ESBL.

By implementing the CTM-M NG Biotech kit, the majority of ESBLs may be confirmed within 15 minutes and the price of each kit is less than the current method.

I would like to express my greatest gratitude to STHK Microbiology department at Whiston Hospital and Liverpool John Moores University for the advice and guidance offered to me throughout this project. In particular I would like to thank Lydia Newhall, Robert Price and Kerryanne Brown for their continued support in the lab. I would also like to thank my Mum and Dad for their support during the completion of my project and keeping me calm throughout.