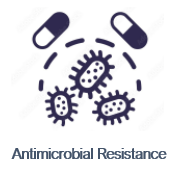 What is so important about AMR anyway?

Mr P has a rattly chest, always has done. He’s the first to come down with any cough or cold that is circulating and it takes ages for him to recover fully. Mr P receives antibiotics two or three times a year but stops taking them as soon as he feels better. He keeps leftover antibiotics in his bathroom cabinet ‘just in case’.

Not all bacteria are ‘bad’

Everyone has bacteria living in/on their bodies; in their guts, their lungs, and on their skin. These bacteria are called commensals or colonisers and don’t usually cause us any harm, in fact they have a protective function against harmful bacteria and viruses. When you take an antibiotic, all the bacteria in/on the body are exposed to that antibiotic, not just the harmful ones that are causing the infection.

Antibiotics are chemicals at the end of the day. In addition to wiping out our helpful/protective bacteria, which can lead to an overgrowth of yeast (Candida), antibiotics can directly upset our guts and cause diarrhoea, or cause skins rashes, and in extreme cases anaphylactic shock.

After antibiotic treatment for a respiratory tract infection, adults have up to three times the odds of a drug resistant infection if they have another infection in subsequent months.

How does bad antibiotic etiquette affect you?

So, let’s pretend that you are a friend of Mr P and pop round for a visit. After his regular use of antibiotics, the bacteria living in his lungs and bronchial tubes are not causing him any trouble but they have become ‘used’ to the drugs and can now survive whenever he takes antibiotics. While you are visiting, Mr P is coughing and rattling as usual and the bacteria that are in the droplets and aerosols from Mr P’s chest find their way into your lungs.

After a week of worsening shortness of breath, chest tightness and a very productive cough, you make an appointment with your GP. Using the Aidian QuikRead® go easy CRP kit, the GP determines within 2 minutes that your CRP is >200mg/L and that you would benefit from antibiotics. Unlike Mr P, you are diligent and complete your course of amoxicillin but after finishing your antibiotics, you don’t feel any better, in fact you feel a lot worse. You’ve developed a temperature; you are not able to work and you’ve had to cancel your social engagements because you feel so poorly. You manage to get an urgent appointment to see your GP, who takes one look at you and sends you straight to the hospital for a full assessment.

The doctors at the hospital are worried that you have pneumonia and are developing sepsis; your temperature is 38.5°C, your heart rate is very high and you are breathing faster than normal. A nurse collects some blood from your arm and puts it into two bottles (Image 1). These are called blood cultures and will be sent to the laboratory to be incubated in a machine that encourages any bacteria present in your blood to grow. You are admitted to hospital and put onto a drip containing different antibiotics to the ones that you have taken previously.

After a couple of days, the results of your blood cultures come back from the laboratory and while there is good news in that the doctors know what is causing your infection, there is bad news because the bacteria from Mr P that have got ‘used’ to antibiotics have spread to your lungs. Unfortunately, these bacteria are not easily treated by antibiotics; the bacteria have become resistant to antibiotics. The antibiotics in your drip are changed but your clinical condition deteriorates. You are becoming critically ill and need admission to ICU…

This story could have a happy ending or there is the potential for things not to work out for you. All because someone else thought that they knew best about how to take antibiotics.

You’ve made that up!

This is fictitious example describing an extreme but not impossible situation was written to try and explain why we need to treat antibiotics as the precious drugs that they are. If we are healthy and active with no underlying medical conditions, it is likely that infections will be self-limiting and get better on their own without the need for antibiotics.

The table below is taken from the TARGET Treating Your Infection Respiratory Tract Infection patient information leaflet and lists the typical length of time it takes to get better from different respiratory tract infections – some take longer than you would expect and there is evidence that receiving an antibiotic will not shorten the duration of illness.

Antibiotics need to be saved for those who need them

There are situations when antibiotics are needed and this treatment could be life-saving. According to the Antibiotic Guardian website, “over three million surgical operations and cancer treatments a year could become life threatening without antibiotics.”

Don’t be like Mr P and think that you need antibiotics every time that you get a cough or a cold. Think of the tiny premature baby with neonatal sepsis fighting for her life on a neonatal ICU ward. Or the elderly neighbour who fell down the stairs and now needs a hip replacement. Give them the best chance of survival by listening to your healthcare provider and taking their guidance about antibiotics.

How else can you help?

There are simple actions that we can all take to contribute to the fight against the development and spread of antimicrobial resistant organisms (from the Antibiotic Guardian website):